We arrived September 5th and it seems like that was months ago. The process of finding a place to live, a vehicle to drive and how to even shop takes a lot of effort and lends to so much frustration. Stores are not set up in the way we are accustomed to in the U.S. and cars cost about twice as much. The cost of fuel leaves us with the option of buying a vehicle with a four cylinder diesel engine, which is actually fairly common when it comes to vans anyways.

Now beyond the practical, day to day living necessities, we have the village we are working in – Villa Paraiso. Here we have seen a number of people desiring to come to the church and not sure if they are allowed to come.  I have found that many more can read than I initially thought; however, there are still many who cannot.  Jim has stepped out of his comfort zone and has preached a couple of times in Spanish, which I am sure has helped him learn even more.

Our children have played a part in bringing families to the church, they have been a type of bridge in the community. When the children of the village see the gringitos arrive, they come running to play with our kids. An aspect of the culture that has sort of caught us off guard was the violent aspect in how the kids will play or fight. So often a teased child resorts to anger followed quickly by punching and kicking and then even rocks being picked up to be thrown (and believe me there is no shortage of rocks within reach.) As we interact with the children and something gets a little out of hand we become the peacemakers. Don’t let this come across as a negative comment, what we are seeing is what the Lord will work on as people come to know Him, the fruit will be revealed in time. Also, we get to experience little things that are blessings. As an example, one little boy who Silas has befriended went after a child who took his toy, which, by the way this toy was a moped tire that he rolls around.  The little boy Yannay (said the same as Johnny) took a rock to throw at the boy who took his toy. Silas grabbed his hand and said “no Johnny, no!” and held his hand until he dropped the rock. I think that Jesus spoke of these “peacemakers” if I am not mistaken.

There is so much to learn of this culture and of the people in the village. There are boundaries to get beyond, there are walls to be torn down and there are areas where we will have to be like Paul who became like those who he ministered to (maybe that is why God provided us the van that we drive.)

We are excited about what God is doing here and we are blessed to be working with Island Light Ministries, knowing Jim and Debra Tunnicliffe and even some of those back in Medford Oregon who play the “behind the scenes” roles. We have a vision of revival for God’s people and a great harvest that the Lord has been preparing.  The prayer God has put on my heart is for His people to come back to Him and fully love Him.  AND if you are one of those whose walk has been on the fence, come, return to the Father who is waiting for you with open arms! 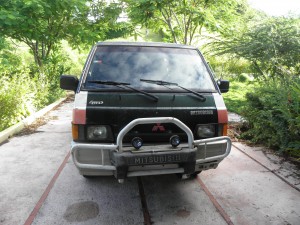 This entry was posted in Villa Paraiso.

The Oliveria family, missionaries serving in the Dominican Republic.