Yes, Samuel has broken an arm, not serious – gracias a Dios.

Here are copies of the bills: 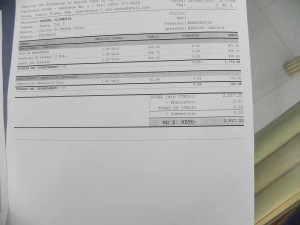 Bill for Hospital and X-rays 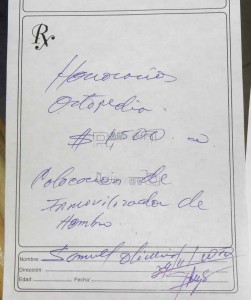 Two more dents into our already dented wallet. $2,527 for the hospital and d$1,500 for the doctor! Boy am I glad this wasn’t in US Dollars, which would probably what you would spend for the emergency room, doctor and x-rays in the states. Overall this was about $110 USD, which is way cheaper than any part of a visit in the U.S.

The crack is in the upper portion of the humerus, yet he didn’t find it very funny. It isn’t all the way across the bone, so it should heal quickly.

Here is the happy boy now: 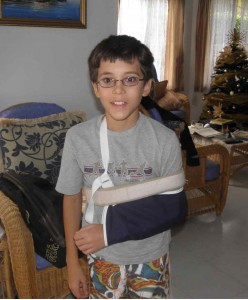 Thank you for the continued prayers for our family!

Well, this isn’t our normal post, but one that is sort of commercial in nature. We have owned www.NorthwestGifts.com for around 12 years now, but no longer is it a direct source of income. However, our friend Daniel Szczesniak is now running that and our other website www.UrnsNW.com

So, if you are looking for Christmas gifts, Golf gifts, floral wreaths or a number of gift ideas please check out what is offered at Northwest Gifts. Sales will benefit our family as well as Daniel’s.

Making the move to a 3rd world country and not having health insurance (even beforehand) and not even sure how skilled or what kind of care you can get is interesting to say the least. We have already had to go to the pharmacy a couple of times, first for Heather’s eyes which had something like pink eye and then Silas scratched mosquito bites with dirty fingers and it got infected and now Jessica to the hospital.

First off we believe things are fine (to put you at ease, especially Bonnie) But for Jessica to find a lump at the age of 38 which was the age her grandmother passed away from breast cancer, was a bit nerve racking. The thought of fighting that kind of battle here was not something high on my list.  We have already heard enough about cancer deaths here, but I know that we have a great God that can heal and restore all things.

Doctor appointment in a foreign country: $30
Mamogram in a new facility: $30
Ultrasound in a 3rd world country: $23
Knowing you serve a great and awesome God and having family and friends praying: Priceless.

After writing the above we returned to the doctor to get more information. They don’t believe it looks like cancer and they recommend it to be removed and studied. We are praying about this, but for now we are able to relax and praise God for mercies. 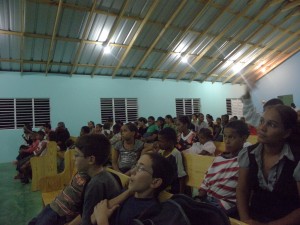 Island Light Ministries is planning a special Christmas service in the church in December. We hope that it will bring glory to God through praise, worship, testimony and more. Part of what we would like to do is have a gift package for each family along with a Christmas dinner at the church.

We are asking our church family to remember their  brothers and sisters who have little to nothing and that even the smallest thing can mean a lot to them. Even $5 can go a long way to provide gifts for these families here. Please ask God what it is that you can do to bless your family here in the Dominican Republic.

Continue to pray for this church as the Lord moves you to. He is doing great things here with His people!

God is moving and we are trying to keep up! When God moves in an area and you are one of His servants, be ready. Be ready to run and see all He does.

I believe God has put me into similar shoes as those of Gideon. Everything that I am involved with is greater than I am yet God has called me to do these things. The awesome part is, like Gideon, I really don’t do anything substantial I just have to obey Him and follow His lead. God goes before and conquers the enemies. We go not as a huge army, but small, not just with swords, but with the unconventional weapon of love, not with fear, but with His word and knowing God has a plan and the ability to make His plan happen. We get to see the impossible, the unbelievable and we, as His children get to have the benefits of living in His family. I love serving a living God!

37For here the saying holds true, ‘One sows and another reaps.’ 38I sent you to reap that for which you did not labor. Others have labored, and you have entered into their labor.”

You see, we don’t have to be the ones sowing to be part of the reaping and sometimes when we sow, we do not always see the harvest. We get to play a part of God’s plan of salvation in lives either way.

All of this to bring up a recent celebration in heaven. A man named Jeremiah and his wife came to church last Wednesday. Jeremiah was sick and towards the end of service Lewis asked him and his wife to come up and we prayed for him. He was healed physically and then both him and his wife gave their lives to the Lord. I am not even sure what I did exactly. All I know is when Lewis explained the news to another he mentioned something I did, however, since it was in Spanish I don’t know what it was that I did.

Like Gideon, if I just keep obeying God it will be obvious who is doing the work. God doesn’t stay still, He keeps on moving.

Keep praying for your brothers and sisters here in Villa Paraiso in the Dominican Republic.

One of the residents of Villa Paraiso is a young man with his wife and 2 kids. This young man is always willing to talk (a lot in English) and makes his presence around the church and is a neighbor of a lady we visit a lot. This young man is not a believer, when asked about things he says he is “watching”.

How many of us have watchers, those who are wondering about Christians, about Jesus, about the church and who watch us? They are looking for evidence in our walk, do we really believe what we say we believe? This young man offered us some food today, he made some great spaghetti and rice. He is currently jobless and here that means no job and no unemployment benefits.

Also, I know that there is that time when I will have to challenge him on his “watching” to see if he will be walking. I don’t believe that just my walk, but also my words will bring to him the good news, the Gospel, the truth of Christ which can free him from sin.